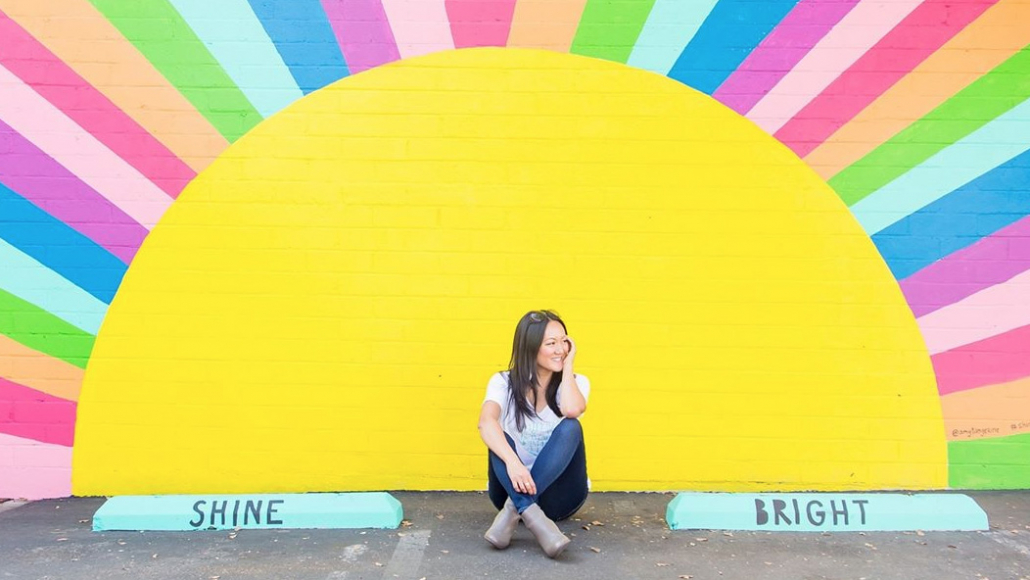 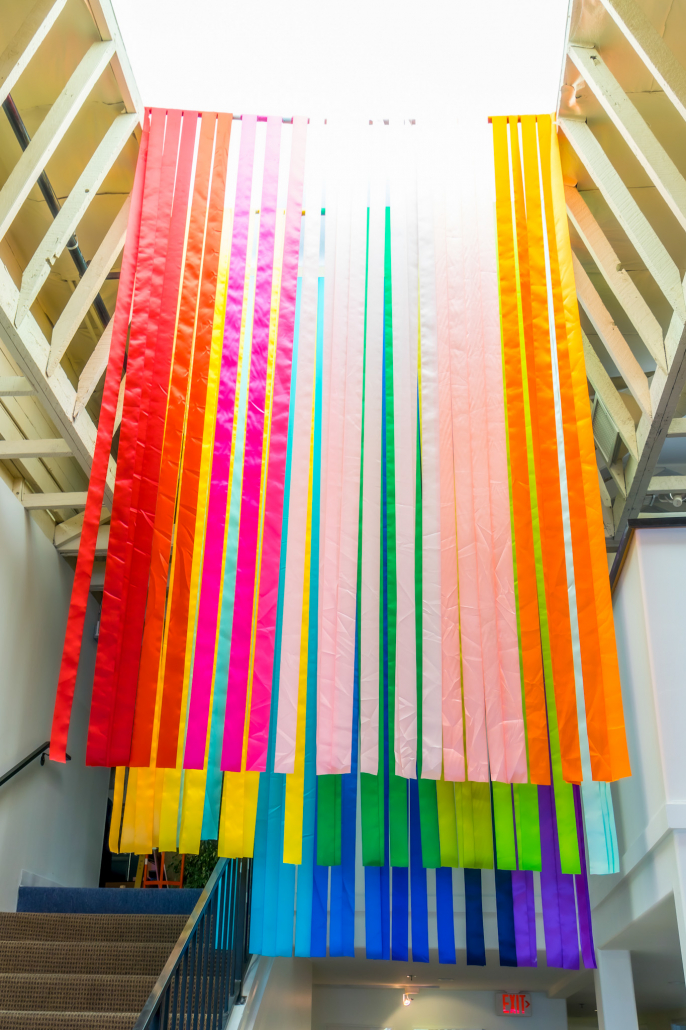 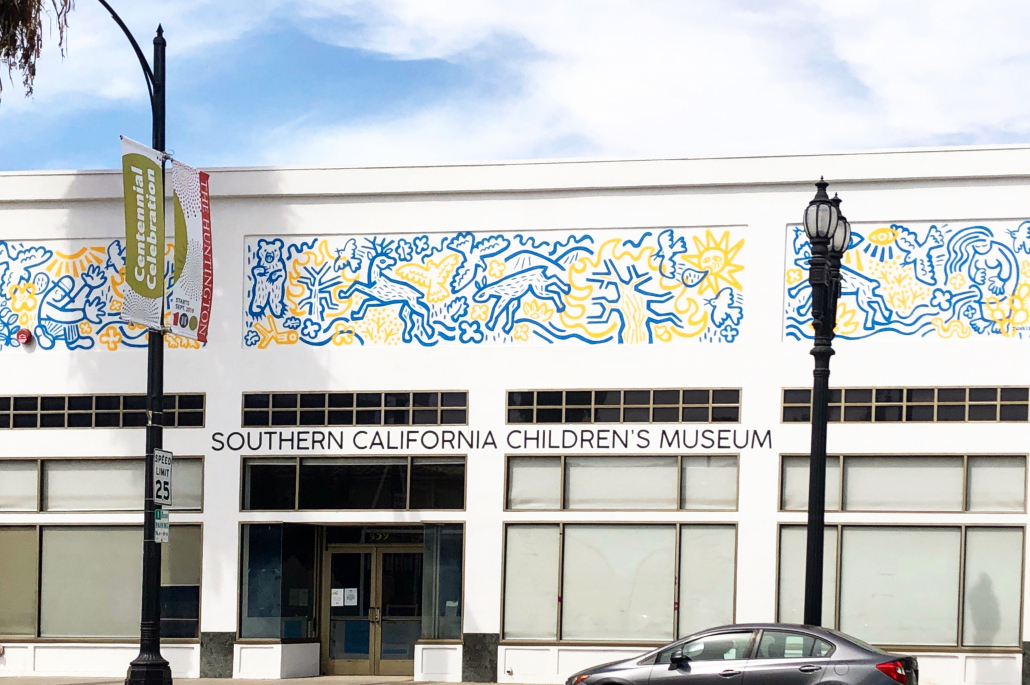 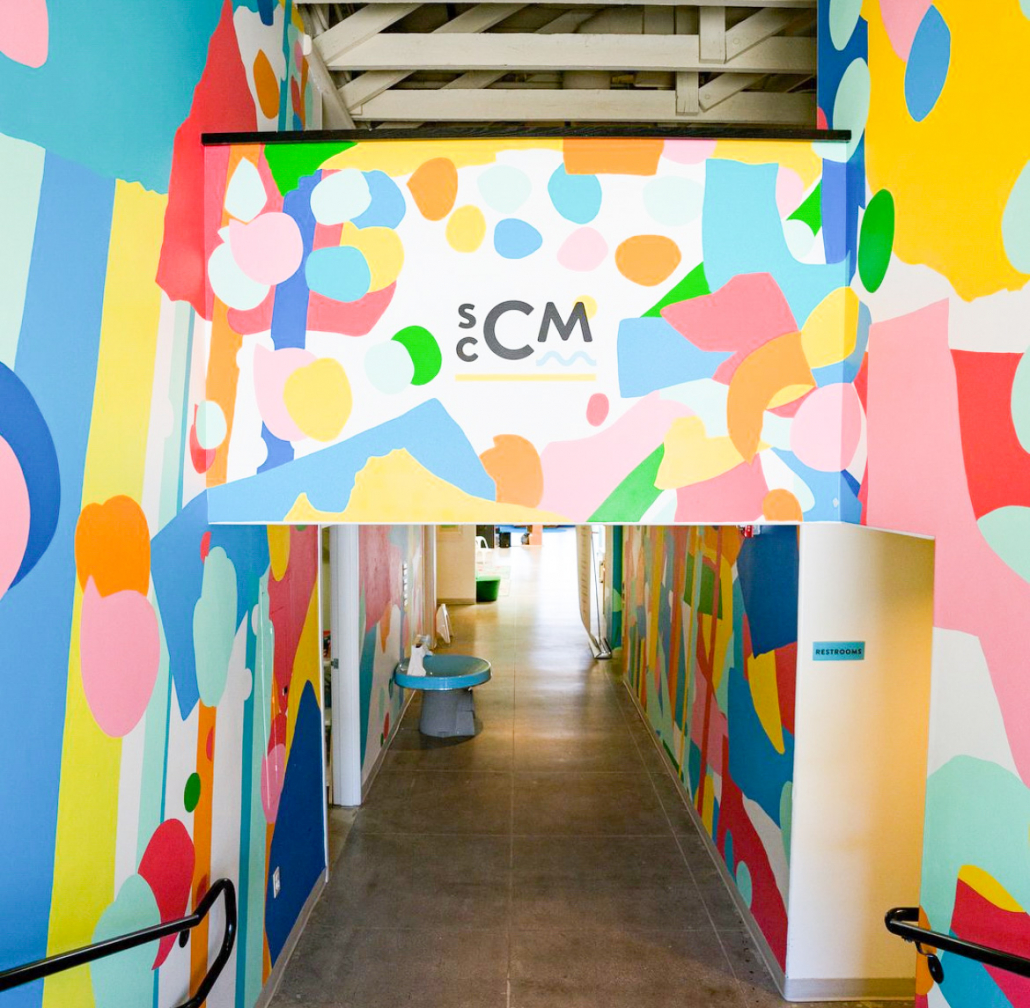 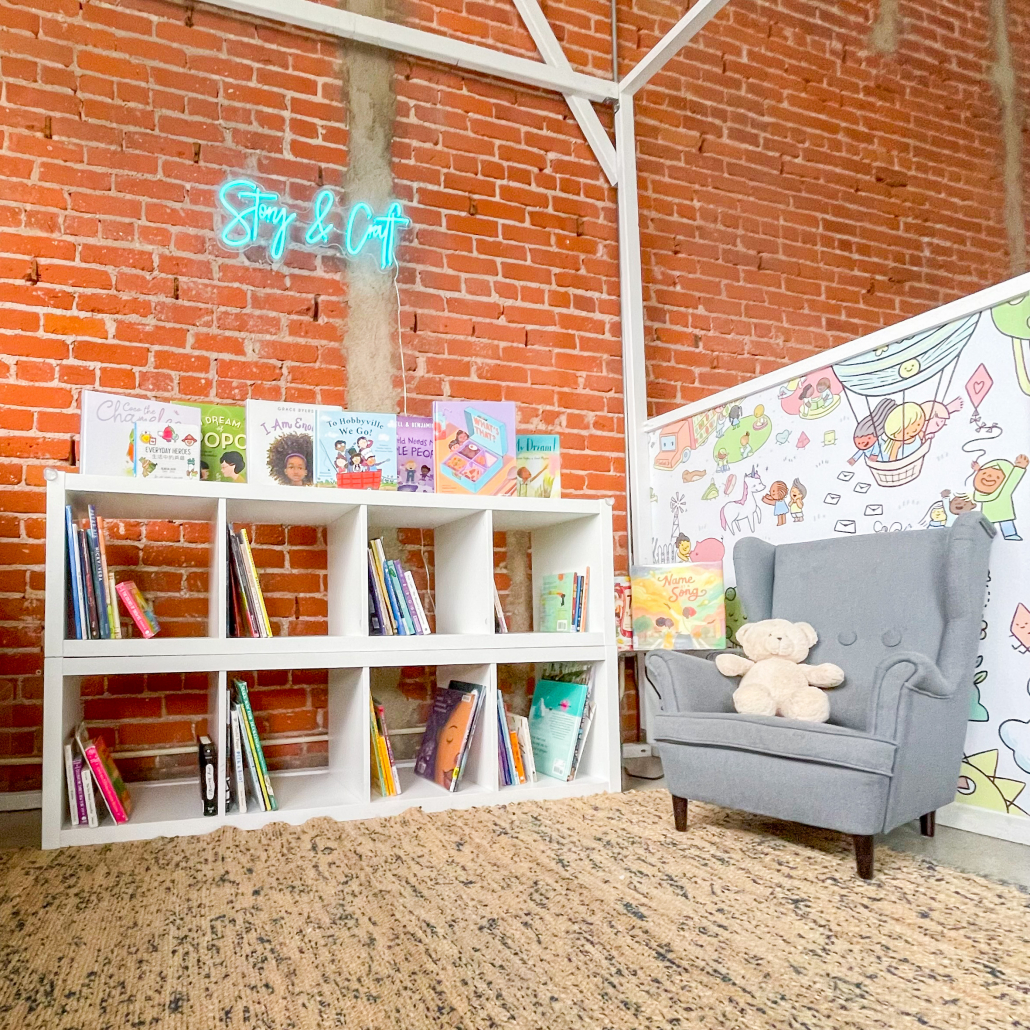 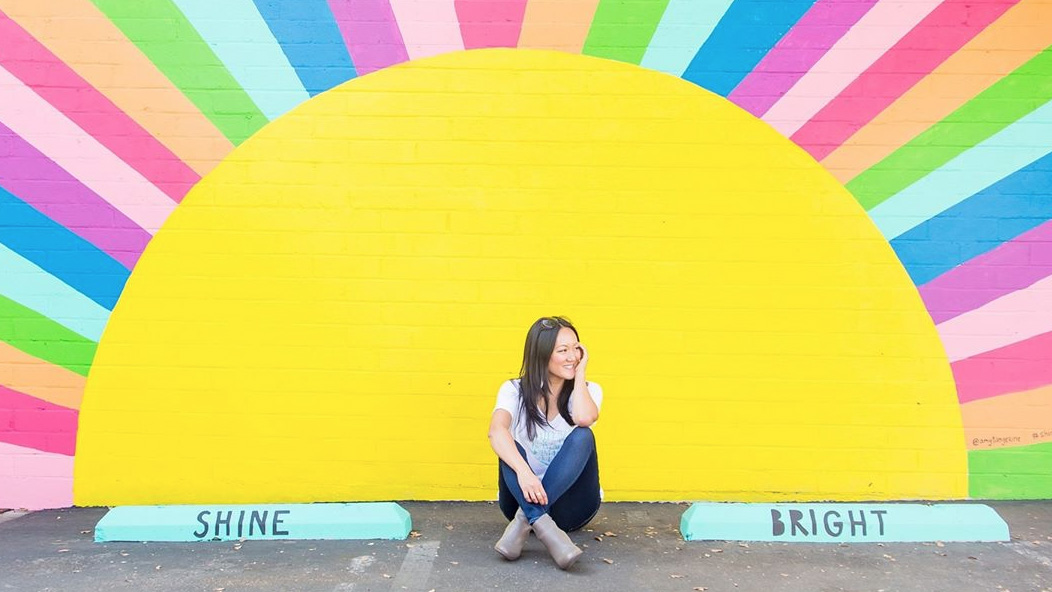 Located in the Southern California Children’s Museum parking lot, this rainbow wall was completed in the Fall of 2019. It is a colorful reminder that “if you throw something positive into the Universe, it will respond with something as good as or better than what you wished for. Your dreams are infinitely more likely to come through when you believe in yourself and are open to the powerful forces of the Universe. The future is bright!” – Amy Tan, artist. #shinebrightSCCM

Small business owner, proud mama, and hand lettering enthusiast, Amy Tan is the founder of Amy Tangerine, a brand fully committed to providing creatives with the tools and space to see the bright, shiny side of life. Amy is the author of Craft A Life You Love and Making Memories (Feb 2022) and runs online workshops from her colorful studio. Her mission is to inspire and empower women to find joy and confidence through creativity. She loves any excuse to celebrate and spread happiness. You can meet Amy at the intersection of creativity, passion, and purpose.
ᐧ 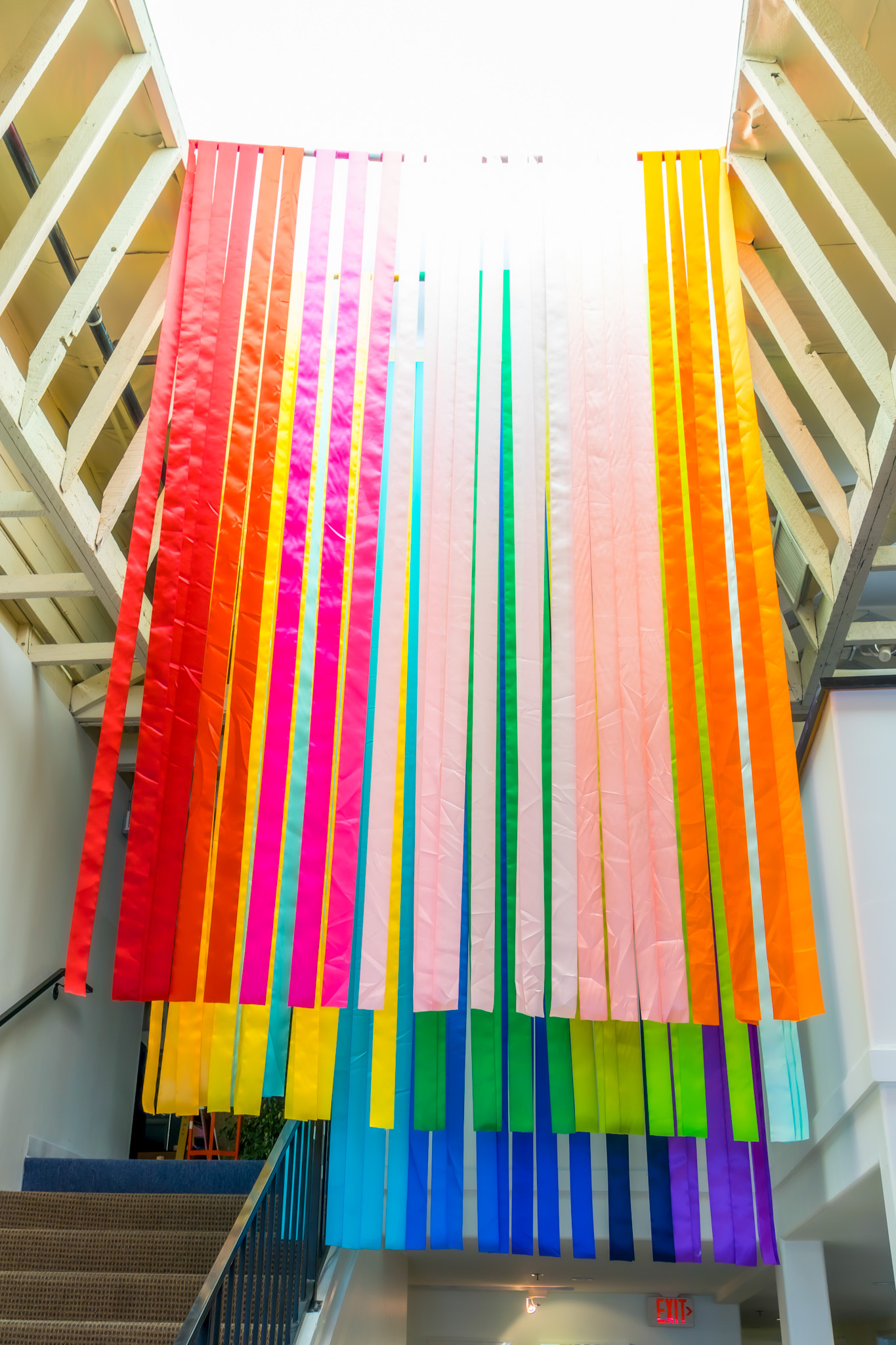 Corrie Sullivan is an Irish-born creator and artist, and the founder of Corrie in Color. She lives in Los Angeles with her husband, Aaron, and three daughters, Sienna, Scarlett, and Indigo (yes, all colors). The two initially left Ireland to spend a year exploring LA – 12 years later, they never left. Corrie has never not been creating. Her love of texture and art has been within her from childhood, and led her to hold a degree in Textile Design and Art History, specializing in embroidery, from the National College of Art and Design in Dublin. Corrie is fascinated by the powerful way that art influences us, and loves soaking up inspiration from creative cities, museums, fashion, and food. She also wears the most fabulously bright outfits you’ve ever seen.

Eric Junker channels his restless energy into creating art and design inspired by the colliding energies of his life in urban Los Angeles and his passion for nature and outdoor adventure. His California inspired psychedelic nature-pop murals can be found throughout Southern California, and as far afield as New Mexico, Texas, Louisiana, Baja California, Costa Rica, and New York City.

In his interdisciplinary creative practice, he has contributed design, art, and ideas to a client roster that has included OCULUS, TOMS, PATAGONIA, COACH, TARGET, and the LOS ANGELES PHILHARMONIC. His work has been recognized by CBS This Morning, NBC LA, ABC 7, the New York Times, the Los Angeles Times, Cool Hunting, Elle Décor, and Angelino Magazine. He is also active in non-profits that support pediatric cancer research and homeless youth empowerment.

He’s currently a Lecturer at USC’s Roski School of Art and Design.

Inspired by the colors, sights and sounds of Los Angeles, this mural was deesigned by Oh Joy! for the Southern California Children’s Museum.

Joy Cho is a graphic designer, blogger, author, and entrepreneur. She is the Founder and Creative Director of the lifestyle brand, Oh Joy!, known for bringing joy to the everyday. She has authored six books and consulted for hundreds of businesses around the world. Oh Joy! creates a wide range of licensed products including home décor, baby & nursery, pet, travel, and furniture collections. For two years in a row, Joy was named one of Time’s 30 Most Influential People on the Internet and has the most followed  account on Pinterest with over 15 million followers. Joy and her husband have two daughters, Ruby age 9 and Coco age 6 and they live in Los Angeles.  Follow along with her @ohjoy.

Installed in February 2022, this mural is the newest addition to Southern California Children’s Museum! Featured in the updated Story & Craft corner, these colorful and whimsical graphics celebrate the joy of reading and the power of imagination!

Shiho Pate was born in Hokkaido and raised in Aichi, Japan. She received her degree in illustration from SCAD and worked for indie gaming from SCAD and worked for indie gaming studios before she started making children’s books. Shiho lives in Southern California with her beach loving daughter and game loving husband. Animated Science: Periodic Table was released on October 5th 2021 (Scholastic) and a follow-up book, Animated Science: Rocks and Minerals will be out in Fall 2022. Ramen For Everyone will be out in Spring 2023 (Athemeum, Simon & Schuster). Visit her at ShihoPate.com or @shihopate on Instagram.

Subscribing to our mailing list is the first step in becoming part of the SCCM community. Join the movement to build something truly unique for our area’s underserved children, and ensure you and your family never miss out on what’s happening next!

This website uses cookies to improve your experience while you navigate through the website. Out of these cookies, the cookies that are categorized as necessary are stored on your browser as they are as essential for the working of basic functionalities of the website. We also use third-party cookies that help us analyze and understand how you use this website. These cookies will be stored in your browser only with your consent. You also have the option to opt-out of these cookies. But opting out of some of these cookies may have an effect on your browsing experience.
Necessary Always Enabled
Necessary cookies are absolutely essential for the website to function properly. This category only includes cookies that ensures basic functionalities and security features of the website. These cookies do not store any personal information.
Non-necessary
Any cookies that may not be particularly necessary for the website to function and is used specifically to collect user personal data via analytics, ads, other embedded contents are termed as non-necessary cookies. It is mandatory to procure user consent prior to running these cookies on your website.
SAVE & ACCEPT